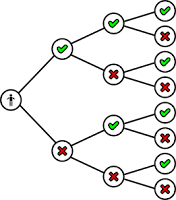 During our recent Men’s Retreat (February of 2010) the topic of sexual purity was discussed, and specifically someone asked about how to overcome his struggle with sexual thoughts.

While I don’t intend on discussing the whole topic of overcoming sin, God brought a few thoughts to mind last Friday that I want to share with you.

The first thought is that God is full of grace and truth. He is the restorer and healer. He has re-created those of us who have trusted in Jesus’ death and resurrection which takes away our guilt and gives us ultimate, final victory over the power of sin and death. This means that we’re new creatures who are no longer spiritually and eternally subject to the law of sin and death and who will ultimately be clothed with immortal bodies as well (1 Cor. 15:42). We are forgiven of our past, present, and future sins. God considers us His pure and holy children in a spiritual, eternal sense.

The bad news is that in our current state, our flesh is still alive and has the potential to influence our lives. Hence, we still have some level of a struggle with sin, influenced by our own flesh, the world, and the devil.

My second thought is that we can praise God for recreating us and redirecting the course of our lives and our families. Most of us came from less-than-godly households. Most of us, Lord willing, will raise godly children who won’t struggle with sin nearly as much as us. Or will they?

The number one reason why I believe most of us struggle with sin as much as we do is because our minds have been trained nearly exclusively by the world and not by God.

I wanted to ask this brother who posed the original question how much secular media he takes in regularly. Before I knew Christ, I was heavily influenced by secular music, video games, movies, and T.V. About 99% of what I watched and listened to was rated “P.G.” so to speak. My point is that the media I consumed everyday was not “bad” by the world’s standards, but the problem with it is that it was the world’s standards. It portrayed the world as though it exists without God. All it’s ideas about the institutions in society, government, science, nature, and the supernatural were from a worldly point of view (2 Cor. 5:15-17)—a false point of view.

Companies pay a lot of money to research how media affects us so that they can use it to influence us the way they desire. Have you ever heard of “the power of suggestion?” Secular media is often so powerful because it merely suggests things. The short skirts, low-cut tops, and handsome men who seem to be romantic all suggest that these people are desirable to our flesh. If media blatantly portrayed something, we would likely put up our defenses quickly. Sexual relations on prime-time are merely suggested. The producers know that the viewers will continue in their imaginations where the camera left off. This type of content is put in to pacify the plebeians who love this type of programming and give it a high rating. Hopefully it makes all of us uncomfortable. But does it make you uncomfortable enough to not turn it on to begin with? They take advantage of psychological schemes and the weakness of human flesh to control you like you have puppet strings attached.

I learned about these schemes in a class at the University of Florida called T.V. and American Society. No, I don’t recommend you take it. Thanks be to God that He has cut those puppet strings! However, some of you may be trying to reattach those strings without realizing it when you voluntarily take in hours of worldly media and minutes of the Bible.

We need to turn off the media, even the shows that seem “innocent,” and turn on God’s Word and His truth in our lives and, Lord willing, raise our kids to do the same. Let God reprogram your brain without having to compete with the lies you take in from the media. I am not saying that it is necessarily sin for you to consume the world’s entertainment, but it may be (see Romans 14). Besides that, it’s likely hindering your ability to live out the Great Commission.

“Endure hardship with us like a good soldier of Christ Jesus. No one serving as a soldier gets involved in civilian affairs—he wants to please his commanding officer.”—2 Timothy 2:3-4 NASB
Posted by John at 11:17 AM