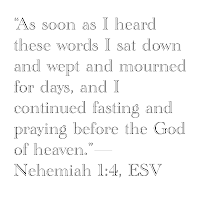 “2...And I asked them concerning the Jews who escaped, who had survived the exile, and concerning Jerusalem. 3 And they said to me, “The remnant there in the province who had survived the exile is in great trouble and shame. The wall of Jerusalem is broken down, and its gates are destroyed by fire.” 4 As soon as I heard these words I sat down and wept and mourned for days, and I continued fasting and praying before the God of heaven.—Nehemiah 1:2-4, ESV

Here Nehemiah understands that his beloved home, Jerusalem, lies in ruin. This was the very place where God was supposed to bless His people and make them prosper and dwell with them. Yet God disciplined Israel by allowing the Babylonians to conquer them due to Israel’s disobedience and wickedness.

After praying, Nehemiah, who was the cup-bearer of the Persian King Artaxerxes goes in before him. The king noticed Nehemiah’s sadness and asks him about his sadness. Nehemiah explained how his home was in ruins, and the king asked him what he was requesting that the king do? Notice what Nehemiah did next:


4...So I prayed to the God of heaven. 5 And I said to the king, “If it pleases the king, and if your servant has found favor in your sight, that you send me to Judah, to the city of my fathers’ graves, that I may rebuild it.”—Nehemiah 2:4-5, ESV

The king granted his request.

For some reason many Christians in this country have the attitude that they should not concern themselves with the affairs of the state or in any way interfere. I also used to have this attitude. This was definitely not the attitude of God’s people in the Old Testament and New Testament. I believe it was because they understood that the government, like many of the world’s systems and institutions, affects the people that God loves and Jesus died and resurrected for. This is one reason why Paul urged Timothy to pray for kings (see 1 Timothy 2:1-4), and why Paul did not hesitate to proclaim the gospel whenever he was brought before governing authorities. For example, take note of Acts 24:24-27, ESV:


24 But some days later Felix arrived with Drusilla, his wife who was a Jewess, and sent for Paul and heard him speak about faith in Christ Jesus. 25 But as he was discussing righteousness, self-control and the judgment to come, Felix became frightened and said, “Go away for the present, and when I find time I will summon you.” 26 At the same time too, he was hoping that money would be given him by Paul; therefore he also used to send for him quite often and converse with him. 27 But after two years had passed, Felix was succeeded by Porcius Festus, and wishing to do the Jews a favor, Felix left Paul imprisoned.

Thankfully, since our government is a republic that answers to “We the People,” we have an easy way to influence the government establish and maintain justice and peace. We just need to pray, vote, petition, share the gospel, run for office... The list can go on since we have a government that “We the People” participate in. Praise God for that! Our government is so unlike the monarchies and dictatorships that were commonplace until the founding of our republic.
Posted by John at 5:37 AM