‘9 Behold, a son shall be born to you who shall be a man of rest. I will give him rest from all his surrounding enemies. For his name shall be Solomon, and I will give peace and quiet to Israel in his days.  10 He shall build a house for my name. He shall be my son, and I will be his father, and I will establish his royal throne in Israel forever.’—1 Chronicles 22:9-10, ESV

A common belief among today’s young people is that the God of the Old Testament is a different God than that of the New Testament. The point to his anger and judgment on Israel and other nations. While discussing that point would be good, that deserves it’s own post which I won’t get to right now. One thing I will say is that I know that the God of the O.T. is the same as the God of the N.T. because of verses like this which foreshadow the coming Christ and also have immediate near-future fulfillment. But besides the hundreds of verses like this that exist in the O.T. Jesus, himself, when teaching, often recited verses from the O.T., including ones like this from David who quoted to his son Solomon what God had told him through the prophet Gad. Jesus also confirms the flood during the days of Noah, and marriage from the book of Genesis, and many other ideas from the O.T. 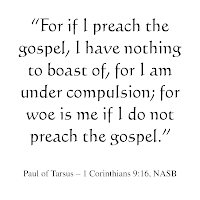 As Christians, we have more than enough reasons to be confident that the Bible ultimately conveys one consistent message from the Creator of the universe over a span of thousands of years. And since it is true, its message is urgent, and since its message is urgent, we as believers, must live like we really believe this so that we do all that we can to communicate the message of the gospel. If we say we believe it, and yet our lives look no different than heathens’ lives do, then we don’t really believe it.
Posted by John at 4:48 AM

Email ThisBlogThis!Share to TwitterShare to FacebookShare to Pinterest
Labels: 1 Chronicles 22, Bible, reliability of the Bible