The Valley of Slaughtered Children

What does God think about a nation’s role in protecting innocent life?


1 Thus says the Lord, “Go and buy a potter’s earthenware jar, and take some of the elders of the people and some of the senior priests. 2 Then go out to the valley of Ben-hinnom, which is by the entrance of the potsherd gate, and proclaim there the words that I tell you, 3 and say, ‘Hear the word of the Lord, O kings of Judah and inhabitants of Jerusalem: thus says the Lord of hosts, the God of Israel, “Behold I am about to bring a calamity upon this place, at which the ears of everyone that hears of it will tingle. 4 Because they have forsaken Me and have made this an alien place and have burned sacrifices in it to other gods, that neither they nor their forefathers nor the kings of Judah had ever known, and because they have filled this place with the blood of the innocent 5 and have built the high places of Baal to burn their sons in the fire as burnt offerings to Baal, a thing which I never commanded or spoke of, nor did it ever enter My mind; 6 therefore, behold, days are coming,” declares the Lord, “when this place will no longer be called Topheth or the valley of Ben-hinnom, but rather the valley of Slaughter... 10 “Then you are to break the jar in the sight of the men who accompany you 11 and say to them, ‘Thus says the Lord of hosts, “Just so will I break this people and this city, even as one breaks a potter’s vessel, which cannot again be repaired...—Jeremiah 19:1-6,10,11 (NASB)

In our nation, we practice and approve of similar evil, like the nation of Israel did in Jeremiah’s day. Do we not sacrifice the lives of innocent children (vv. 4-5) to the god of convenience and hedonism and call it “a woman’s right to choose?” What about the unborn baby’s right to live?

I can’t help but believe that God will similarly break our nation beyond repair (vv. 10-11). That will mean an end to such freedom and ability to spread our faith. It will mean an end to “life, liberty, and the pursuit of happiness.” Whatever dreams you have for yourself or your future, forget about.

This same valley was known in Jesus’ day as a perpetually-burning garbage dump (see http://bibleatlas.org/valley_of_hinnom.htm). Jesus used the Greek word for it, “Hell,” as a metaphor to help his hearers understand the eternal judgment they would face for their disobedience towards God and their stubborn, unbelieving hearts (see Matthew 23).

We can bring an end to the horrors of the abortion industry just like we did when we abolished slavery 150 years ago. How? We just simply need to get involved in our government like the Founding Fathers intended. Our government is us, “We the people.” Government officials answer to us. We get involved primarily by voting. 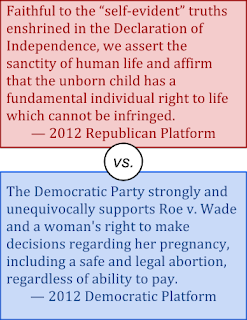 Can you imagine the impact we could have if we all believe that our vote matters? If I remember correctly, there were around seven million votes counted in the November, 2012 election. Certainly there are more than seven million people in this country who believe that our government should protect innocent life. Therefore, in the next election, vote for representatives and executive officials who value innocent life. This is the easiest thing to do.

If a candidate is a Democrat, he most likely believes that “a woman’s right to choose” supersedes the right of the innocent, unborn baby to live. Read it for yourself from the official Democratic Platform (http://www.democrats.org/democratic-national-platform):


Protecting A Woman's Right to Choose. The Democratic Party strongly and unequivocally supports Roe v. Wade and a woman's right to make decisions regarding her pregnancy, including a safe and legal abortion, regardless of ability to pay. We oppose any and all efforts to weaken or undermine that right. Abortion is an intensely personal decision between a woman, her family, her doctor, and her clergy; there is no place for politicians or government to get in the way.

Is this not the same ideology that plagued this country 150 years ago—“If you are more powerful than an African tribe, you can capture them and ship them to southern plantations to be sold as slaves.”

It does not make any sense to support abortion. It is an evil practice that has continued because good people have allowed it to continue.

If a candidate is a Republican, he most likely believes in protecting the innocent, unborn life of the baby: (http://www.gop.com/2012-republican-platform_we/#Item14):


Faithful to the “self-evident” truths enshrined in the Declaration of Independence, we assert the sanctity of human life and affirm that the unborn child has a fundamental individual right to life which cannot be infringed. We support a human life amendment to the Constitution and endorse legislation to make clear that the Fourteenth Amendment’s protections apply to unborn children. We oppose using public revenues to promote or perform abortion or fund organizations which perform or advocate it and will not fund or subsidize health care which includes abortion coverage.

Whatever the candidate’s party, we can’t assume one way or the other which is why I always consult voter guides to help me know where a candidates stands on specific issues. You can find voter guides at http://www.christianvoterguide.com/.
Posted by John at 9:14 AM