29 In the thirty-eighth year of Asa king of Judah, Ahab the son of Omri began to reign over Israel, and Ahab the son of Omri reigned over Israel in Samaria twenty-two years.  30 And Ahab the son of Omri did evil in the sight of the Lord, more than all who were before him.  31 And as if it had been a light thing for him to walk in the sins of Jeroboam the son of Nebat, he took for his wife Jezebel the daughter of Ethbaal king of the Sidonians, and went and served Baal and worshiped him.  32 He erected an altar for Baal in the house of Baal, which he built in Samaria.—1 Kings 16:29-32, ESV


It’s inevitable. When a society approves moral values that are not based on rock-solid, biblical truth, the society only gets worse in every way. This downward progression does not happen overnight, but with each new generation. This happens, because the natural human tendency is to do evil, not good. We only do good by the grace of God, and we only get better by the regenerative work of the Holy Spirit who transforms every true believer who has believed in Jesus’ redemptive death and resurrection.

We must not yield, in any arena in life, to moral values that are less than biblical, however harmless or appealing they may seem. We must not give in to the philosophical argument, “How does the decision of two adults, in the privacy of their home affect others outside their home?” Disobedience of God on any level consequently affects more than those directly involved. This is self-evident as we witness the breakdown of the foundational institution of any society, the family, affecting every aspect of the society. Rather than concede, we must influence. Rather than remain apathetic, we must act. Rather than complain, we must vote. Rather than curse, we must bless our neighbors and win them faith in Christ who is the bedrock solution to any society’s problems. Only He transforms people and their beliefs and actions from the inside out. 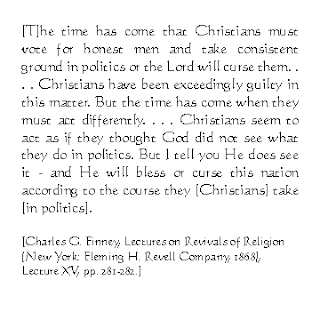