When the Church and State Play Well Together

4 One day King Joash said to the priests, “Collect all the money brought as a sacred offering to the Lord’s Temple, whether it is a regular assessment, a payment of vows, or a voluntary gift.  5 Let the priests take some of that money to pay for whatever repairs are needed at the Temple.”  6 But by the twenty-third year of Joash’s reign, the priests still had not repaired the Temple.  7 So King Joash called for Jehoiada and the other priests and asked them, “Why haven’t you repaired the Temple? Don’t use any more money for your own needs. From now on, it must all be spent on Temple repairs.”  8 So the priests agreed not to accept any more money from the people, and they also agreed to let others take responsibility for repairing the Temple.—2 Kings 12:4-8, NLT

Here is a good example of the “Church” (really the religious community of Jews) and State playing well together. In this case the king urges the priests to collect money to repair the temple. The priests didn’t follow through, and the king rebuked them. Then the priests followed through and the money was properly collected and paid to the men who repaired the temple. They actually had an excess of funds (see 2 Chron. 24:14 [part of the parallel account]).

Compare this to what is commonly done today: The church has responsibilities of caring for people. The church neglects these responsibilities. Religious and secular citizens complain and say we need a government solution. They form committees. They write laws and prepare to collect new taxes. The laws fail to pass a vote. Then an election comes. The people who like the proposed laws get elected. They revisit the proposed laws and they pass. After several years of forming new departments and offices to oversee the responsibilities, the laws finally go into effect. The outcome is plagued by mismanagement and wastefulness and more problems. Citizens take advantage of the system. The laws are reformed in an effort to fix the problems. The government says more money is needed and taxes are raised and things get really complicated. The root of the problem is that many citizens and government officials are morally corrupt. They don’t fear God, and no amount of new laws will stop the corruption. 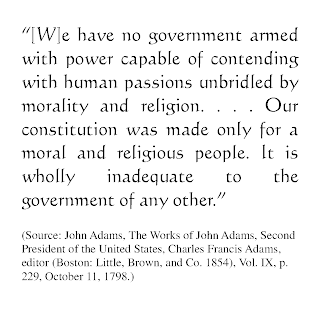 The church is equipped to handle morally corrupt people, because Jesus Christ transforms people from the inside out. Yet, the church can’t just take the responsibilities back because people have learned to depend on the government, and now the financial burden of all the taxes has affected everyone, including the people who comprise the Church. Restoring responsibilities back to the church can be done, but it takes cooperation from the State and the Church. It takes the efforts of all citizens to fulfill their responsibilities for themselves, their families, their churches, and their civil government since “We the People...” are our government. Rather than complain, let’s act biblically and fulfill our responsibilities on every level, including voting for people who have a more biblical worldview.
Posted by John at 11:04 AM