26 And Jeroboam said in his heart, “Now the kingdom will turn back to the house of David.  27 If this people go up to offer sacrifices in the temple of the Lord at Jerusalem, then the heart of this people will turn again to their lord, to Rehoboam king of Judah, and they will kill me and return to Rehoboam king of Judah.”  28 So the king took counsel and made two calves of gold. And he said to the people, “You have gone up to Jerusalem long enough. Behold your gods, O Israel, who brought you up out of the land of Egypt.”  29 And he set one in Bethel, and the other he put in Dan.  30 Then this thing became a sin, for the people went as far as Dan to be before one.  31 He also made temples on high places and appointed priests from among all the people, who were not of the Levites.—1 Kings 12:27-31, ESV 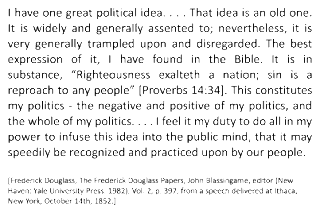 History always matters. The people of Israel were between a rock and hard place. If they followed Rehoboam, they would be subjected to severe labor and punishment. If they followed Jeroboam, they would follow him into great sin, since, for political and economic gain, he re-told history to deceive the masses by claiming that his false gods rescued Israel from the land of Egypt. Most of Israel chose to follow Jeroboam into sin and then disciplined from God for this idolatry.

It’s the same today, and we must be careful to make sure that we know the truth found in the Bible and in our own history and test the words of men by checking their sources of information. A great example of a man who did this is Frederick Douglass. Once he escaped from slavery, he was taught by some abolitionists that the U.S. Constitution was a pro-slavery document implying that the Founding Fathers were pro-slavery. However, since he was a spokesman for the abolitionist movement, he thought he should read the Constitution and discovered, in fact, that the opposite was true (see this article). He stood for the historical truth and biblical truth and became very influential in shaping the Civil Rights movement in the mid to late 1800s.
Posted by John at 11:38 AM