The Purpose of the Law

21 Is the law then contrary to the promises of God? Certainly not! For if a law had been given that could give life, then righteousness would indeed be by the law. 22 But the Scripture imprisoned everything under sin, so that the promise by faith in Jesus Christ might be given to those who believe.

23 Now before faith came, we were held captive under the law, imprisoned until the coming faith would be revealed. 24 So then, the law was our guardian until Christ came, in order that we might be justified by faith. 25 But now that faith has come, we are no longer under a guardian, 26 for in Christ Jesus you are all sons of God, through faith. 27 For as many of you as were baptized into Christ have put on Christ. 28  There is neither Jew nor Greek, there is neither slave nor free, there is no male and female, for you are all one in Christ Jesus. 29 And if you are Christ's, then you are Abraham's offspring, heirs according to promise.—Galatians 3:21-29, ESV

Paul used a logical argument to help the Gentiles understand that being deceived into following the Jewish Law to obtain salvation (or righteousness) is nonsense. He made the argument that they have already obtained it through faith in Christ, which was the way to obtain it anyway, since God made the promise to Abraham before giving Israel the Law 430 years later. God’s promise was that all nations would be blessed in Abraham. Paul made the point that the Gentiles could not obtain salvation if the Law was intended for the nation of Israel in the first place. 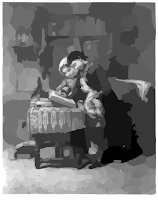 Yet, the Law had an amazing purpose. Its purpose was to show us Jesus Christ. It shows us just how Holy and perfect the living God is and how sinful and imperfect we are. The point is that it is our guardian (v. 24, or tutor, schoolmaster) to teach us that we need the forgiveness that came through Jesus. Paul wrote in Romans 7:7 (ESV), ‘Yet if it had not been for the law, I would not have known sin. For I would not have known what it is to covet if the law had not said, “You shall not covet.”’

Why is it that many religious people still don’t get this today? Rather than saying we must follow the Jewish Law (though some do say that), they often have created their own laws that believers must follow to be saved. Getting baptized by water is common one.

Are you sure that you are relying on faith or trust in Jesus Christ and his finished work (see 1 Peter 3:18) for salvation, or are you still, in some ways, relying on or trusting in your own (or someone else’s) religious law to give your righteousness before God?

This is not say that we don't follow the some of the Law as Christians, but our purpose in trying to follow it as Christians is not obtain righteousness. It is to be blessed and to bless others. Read more about the Law on another post.
Posted by John at 5:57 AM